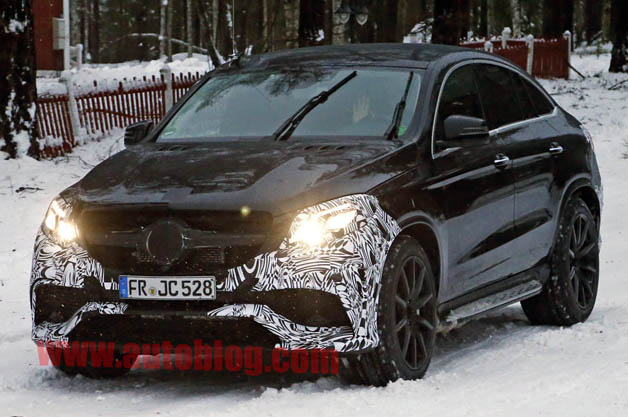 Say what you will regarding the form and function of the BMW X6, the bottom line is that BMW essentially pioneered a winning formula, sloping a roofline onto an existing model to make a new and highly lucrative) derivative. No wonder rival Mercedes-Benz is clamoring to follow suit with models like the one pictured here.

Under development for some time now, the model originally slated to be called the MLC and now expected to be dubbed GLE Coupe looks about ready for its big debut. It's based on the replacement for the current M-Class (to be rechristened GLE) but with that vital sloping roofline to make it more rakish.

This particular example seems to be an AMG version and was spied with only minimal camouflage around the front and rear bumpers while undergoing testing in snowy climes. That could be the full-on GLE63 AMG performance variant, or the new AMG Sport model destined to debut at the Detroit Auto Show next month.

If it's the former, expect it to be packing the same 4.0-liter twin-turbo V8 as the new Mercedes-AMG GT, where it produces either 462 horsepower or 510 depending on spec - ready to take on the X6 M and whatever Audi is preparing to throw at it.