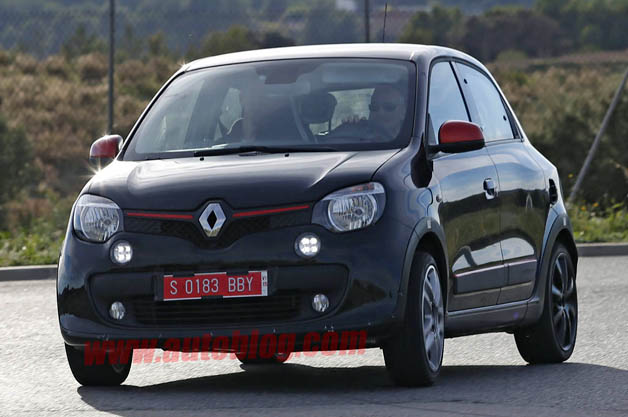 With a rear-engine, rear-drive setup, the Renault Twingo (like its Smart cousin) has the opportunity to be a real firecracker. Unfortunately, even in turbocharged guise, its tiny three-cylinder engine has other ideas. But when we spoke to Renault's engineers at the Twingo's launch in France a couple of months ago, we were told a strategy was being worked out for a performance model. And that appears to be what we're looking at right here.

At first glance this prototype might look like any other Twingo, save for the mismatched alloys. But closer inspection picks up on some differences that tell us something hotter is afoot. And most of those changes are found around the back where the engine is. It's got little air intakes (like those found on the Smart versions) positioned above the rear wheels, to feed more air into the engine bay. It's got a bigger spoiler, and (functional or not) a diffuser at the bottom, with a pair of exhaust pipes poking out. There are even some rivets around the tailgate.

Just what all of that is hiding, we don't know. We're expecting somewhere in the neighborhood of 120-130 horsepower, but it could come from an upgraded version of one of the three-cylinder, sub-liter engines already offered, or could come from something bigger. Whatever the powertrain, it's likely being co-developed, just like the vehicle itself, along with Smart that will offer its own Brabus version.

Whether Renault chooses to call its version a Renaultsport like the last Twingo or undersell it a little with a GT or Gordini badge is another matter, but if our experience with the Twingo, Forfour and Fortwo (to say nothing of Renaultsport's famous hot hatches) are anything to go by, the upgrades ought to make the finished product a real blast - especially with upgraded brakes, rolling stock and suspension to handle the extra juice.