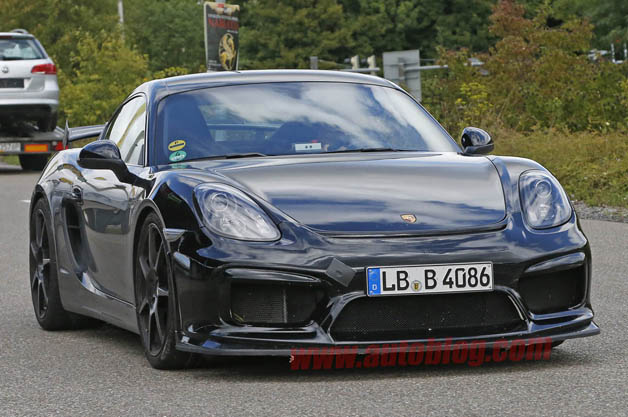 We're all familiar with the succession of numbers that follow the letters GT on a hard-core Porsche 911: the GT1 that was Stuttgart's Le Mans contender in the late 90s, the GT2 that packs turbochargers but without the Turbo's all-wheel drive and excess weight, and the naturally aspirated GT3 that's the enthusiast's choice. But a GT4? That's something new, and exactly what Porsche has in store.

Spied testing in Germany once again is the upcoming GT4 version of the Porsche Cayman, set to supersede the existing GTS and take the place of the previous Cayman R at the top of Porsche's junior sports car range. This latest batch of spy shots doesn't show us much more than the last crop, but gives us a much clearer view at what promises to be the most hardcore Cayman to date.

As you can see, the Cayman GT4 packs a much more aggressive aero kit and rolling stock than any version we've seen to date. It's got a lip spoiler, big air dam and GT3-style vent in front of the hood, deep air scoops along the flanks, a set of spindly alloys packing oversized brakes, a diffuser with twin central exhaust tips around back and a rear wing that's likely to be replaced with a sleeker unit before the GT4 reaches production.

Just what's under the hood, we can't say for sure, but sources expect the same 3.4-liter flat-six as the Cayman S and Cayman GTS, but retuned to produce between 370 and 400 horsepower - which would, for the first time, admit the Cayman into the 911's league in terms of output, if not outright performance. Whether that power will be channeled to the rear wheels through a manual or dual-clutch transmission will likely depend on how Porsche feels the latter choice has played out in the 911 GT3, and we're looking forward to finding out.

Porsche Cayman GT4 speeds back into view originally appeared on Autoblog on Tue, 18 Nov 2014 14:01:00 EST. Please see our terms for use of feeds.