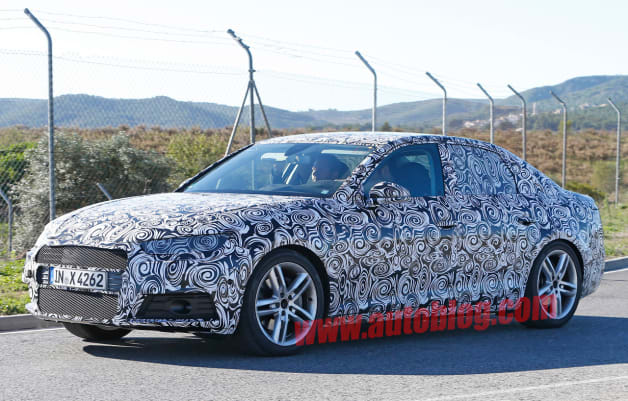 With fresh entries from Lexus and Mercedes-Benz and a newer entry from BMW, Audi is in a rather precarious position with its A4 sedan, which has been on sale in its current form since 2008 (aside from its 2012 mid-cycle refresh). It's high time a new vehicle takes its place.

If Audi follows convention, the vehicle shown above will be known internally as the B9, and will ride atop the so-called MLB Evo, a new version of the modular platform underpinning the current A4 (and a whole heap of other Volkswagen Group products). That new bit of hardware should bless the next-gen A4 with a weight savings of anywhere from 175 to 220 pounds.

In terms of its looks, our spies point to a more evolutionary approach. Expect the A4 to borrow from the design being pioneered by the third-generation Audi TT, particularly around the grille, which should be more upright. The wheelbase should get a stretch while Audi will clip the overhangs of its midsizer, relative to the current sedan.

We're expecting to see the next A4 in just under a year, at the 2015 Frankfurt Motor Show in September. Take a look at our batch of spy photos to see what the German brand is up to.