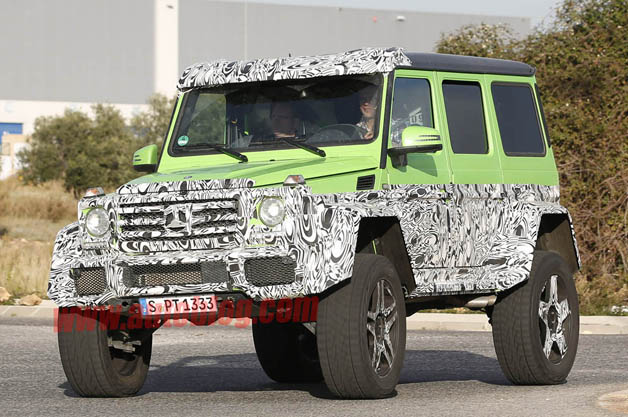 Automobiles don't come much harder-core than the Mercedes-Benz Geländewagen, but AMG has proven up to the challenge time and time again. From the base G-Wagen, the boys in Affalterbach have tuned out successively more powerful versions, but surprised even themselves with the release of the G63 AMG 6x6 last year.

The thing is, not everyone - even those in the market for a G-Class - needs six driven wheels. So now it seems the German automaker is preparing to roll out a version that adopts many of the upgrades applied to the six-wheel-drive version, only with a more manageable four wheels.

Spied undergoing testing in southern Europe, this G-Class prototype (dubbed by our shooters on the ground as the Green Monster or the Hulk) packs wider fender flares, upgraded side skirts, beefier bumpers, enlarged rolling stock and a higher ride height than the standard G-Class - or the same, in short, as the 6x6, minus a couple of wheels and with a wagon body-style instead of the longer model's pickup bed.

Power is expected to come from the same 5.5-liter twin-turbo V8 - all 544 horsepower and 561 pound-feet of it - as the, ahem, "standard" G63, driving all four of those meaty tires through a seven-speed automatic transmission. And here Mercedes wanted to replace the G-Wagen with the GL.