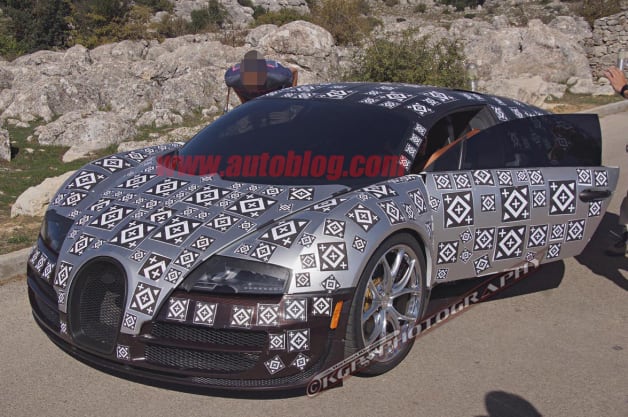 Upon first inspection, this looks to be a strangely styled Bugatti Veyron. Such a thing shouldn't be a shock. We have, after all, already seen the hypercar with a penis on the hood and painted in nearly every single hue that exists on our planet. Take a closer look, though, and we see something altogether different. That's because this isn't a Veyron - it's new, rumored to be a replacement to the Veyron and is allegedly called the Chiron.

The first identifier that we're looking at something different are the huge carbon-ceramic brakes, which dwarf the already meaty pans found on the standard Veyron Super Sport. Beyond that, the distinctive snorkel intakes of the Veyron have been replaced with simple NACA ducts, while Bugatti engineers have ditched the car's enormous adjustable rear spoiler.

That amputation has allowed our spies to peek into the back of the car, and identify what we think are the components of an electric powertrain. Considering current performance trends, we shouldn't be surprised that Bugatti (and by extension, Volkswagen) are tinkering with hybrid tech.

What is surprising is that our spies report that the Veyron's iconic 16-cylinder, quad-turbocharged engine remains in place. The 1,200-horsepower engine will allegedly be complemented by an extra 300 ponies from the electric motor(s), for a LaFerrari-killing 1,500 hp. So yeah, those supersized brakes now make a bit more sense.

Perhaps the strangest thing, though, can be found in the cabin, where the steering wheel from a VW GTI can be found. Don't worry oil sheiks and oligarchs of the world, your next ultra-exclusive, multi-million-dollar hypercar won't share its steering wheel with a $25,000 hot hatchback. This was likely just plugged in because it plays nicely with other VAG components in the test mule.

Take a look at our gallery of images of the new Chiron as it undergoes testing in Europe and let us know what else you spy hiding in these shots.